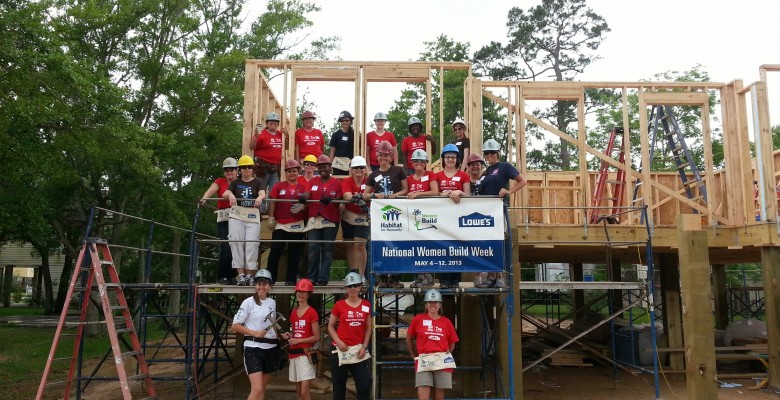 Women Build is Habitat for Humanity’s program for women who want to learn construction skills and build homes and communities. This program brings together women from all walks of life to address the affordable housing issue facing so many in our community. No construction experience required.

National Women Build challenges women to devote at least one day to help build affordable housing in their local communities.

National Women Build is held during the weeks leading up to Mother’s Day because of the significance of women with Mother’s Day.

Families with children with a female head of household make up a staggering number of those in need of adequate housing. More than 12 million children – one in six – live in poverty housing in the United States alone.

HFHMGC has hosted a Women Build event for the past six years. Last year more than 13,500 women volunteer at 325 events across the United States.

This year’s project will be in Moss Point, Mississippi on the home of Ms. Sally.

Ms. Sally has been a lifelong resident of Moss Point, MS. She is a member of First Baptist Church and a graduate of the great Magnolia High School. She worked for over 26 years at Ingalls Shipbuilding and was a strong support figure in housing programs to promote homeownership for low income, first time buyers in Moss Point. She has always made an impact on the community.

She and husband raised 5 children and also made it home for several nephews. But after years of hurricanes, termites and eventually mold the home became unlivable and started affecting her health. But once again the community she loves so much has come to lift her up.

You can join women from along the Gulf Coast and HFHMGC and give Ms. Sally a “hand up” this Mother’s Day.