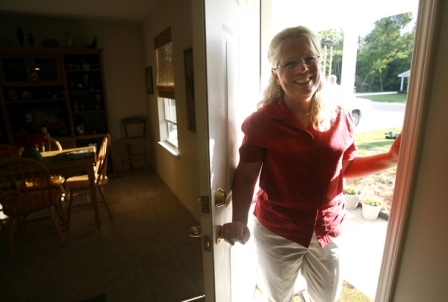 Before Katrina I lived in a subsidized apartment across from the airport. I initially planned to evacuate, but I had relatives that were carless, who I was worried about. They didn’t want to come with me, which messed up my evacuation plans. They planned to hope that the storm changed course. Shortly after my relatives made other plans, I realized that I was going to have to evacuate alone. I saw the traffic and didn’t want to get stuck on the highway, and I knew that I had to stay.

The night before, when I realized how bad the storm was going to be, my friend Mary and I decided to ride the storm out together. Sunday night I packed a bag and went to her apartment, because I figured that it would be too windy to cross the parking lot in the morning. On Monday morning at around 6 AM, we woke up without electricity, and the wind was already blowing. Neighbors joined us in Mary’s apartment. Shortly after the storm started, we were knee deep in water. We all went to the second floor, and prayed. While we were up there we collected things out of the river that developed all the way up to the second floor so that we could figure out a way to survive in case we had to evacuate off the landing. The lord provided us lunch, because we were able to fish cans of food out of the water. I started to get concerned that the second floor landing wouldn’t last. I realized that I had to put all of my faith and trust in the lord, and just sit and pray.

After Katrina, I was moved to a different subsidized apartment. I could only stay there for nine months because the qualifying conditions of subsidized housing changed, and I was forced to move. I lived with friends and family for several months in exchange for helping them around the house while looking for other affordable housing.

When I realized that I wouldn’t be able to find affordable housing in the area, I applied for Habitat. When I found out I was approved, it was a relief to know that I would have an affordable place to live. To be middle aged and on disability, I’m thrilled to qualify. To have a very nice, affordable home for the remainder of my years is amazing. I wouldn’t have had a home if it weren’t for Habitat and all the volunteers. The whole organization is really a labor of love. Being on site doing sweat equity, doing work behind the scenes when I helped out with office work, it’s amazing how Habitat comes together and keeps giving and giving and giving. I’m thankful for the zero interest loan that makes it so affordable.