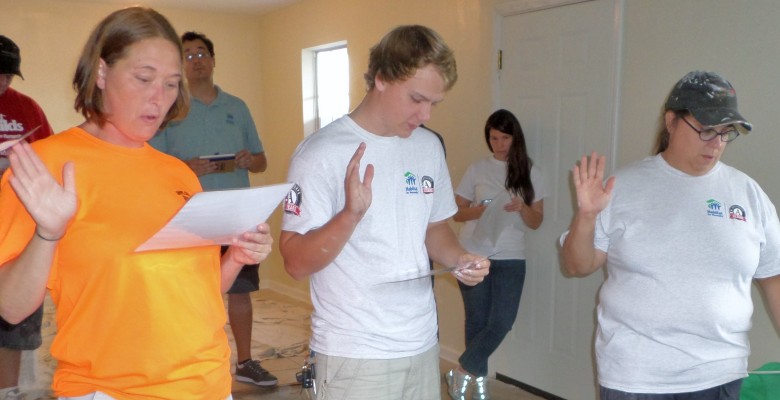 Gulfport, Miss. (September 11, 2014) – Habitat for Humanity of the Mississippi Gulf Coast is pleased to welcome eight AmeriCorps members who have joined their dedicated staff and volunteers to help in Habitat’s work to build and repair decent and affordable housing in Jackson, Harrison and Stone counties.

These members will serve the Gulf Coast in the construction field or in the office working with volunteers and partner families. This year’s AmeriCorps group includes Angela Thomas, Colby Shaw, Genie Talbert, Amber Collins, Calvin Harris, Rae Billiot, Jordan Wood, and Steven Bailey. Five are local and from the Mississippi Gulf Coast. The others are from Michigan, Louisiana and Northern Mississippi. For one member it is her fourth term serving the Gulf Coast.

“I joined AmeriCorps because I wanted to be able to help other people. The best way to find yourself is to lose yourself in service to others,” said Rae Billiot, Construction Crew Leader AmeriCorps.

AmeriCorps members serving with HFHMGC will join more than 400 others placed in more than 100 communities nationwide. These members are anticipated to serve more than 1,500 families, provide more than 650,000 hours of service and engage more than 300,000 volunteers in local community building efforts.

“For nearly 20 years, Habitat for Humanity has relied on the talents and skills of AmeriCorps members to help us build even more homes in partnership with low-income families,” said Mark Andrews, Habitat for Humanity International’s vice president of Volunteer and Institutional Engagement. “Whether it’s mobilizing volunteers, helping communities recover after a disaster, or engaging families and veterans, AmeriCorps and AmeriCorps VISTA members are a crucial component in Habitat’s work.”

Since Habitat partnered with the Corporation for National and Community Service in 1994, more than 7,000 AmeriCorps members have served with Habitat for Humanity. These individuals have helped Habitat serve more than 17,000 U.S. families, contributed more than 13 million hours of service, raised tens of millions of dollars in cash and in-kind resources and engaged more than 2.8 million volunteers.

For more information or to learn how to get involved, please visit www.habitat.org/americorps or www.nationalservice.gov.

Habitat for Humanity of the Mississippi Gulf Coast was formed in January 2007 when Harrison County HFH and HFH of Jackson County merged organizations. Since then, HFHMGC has incorporated Stone County into its service area and has constructed or repaired more than 850 homes. HFHMGC works in partnership with community stakeholders to create innovative, sustainable housing solutions by empowering all members of our community to actively participate in creating opportunity for people to transform their own lives. To learn more, visit www.hfhmgc.org.

About the Corporation for National and Community Service

The Corporation for National and Community Service is a federal agency that engages more than five million Americans in service through its AmeriCorps, Senior Corps, Social Innovation Fund, and Volunteer Generation Fund programs, and leads the President’s national call to service initiative, United We Serve. For more information, visit NationalService.gov.