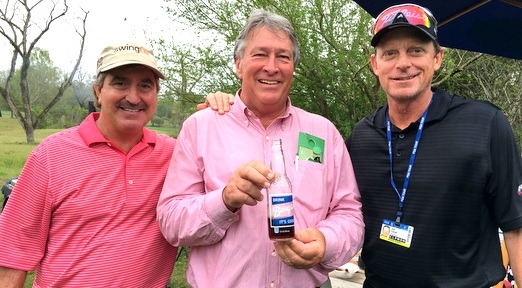 Original story can be found here.

BILOXI, Miss.– You can hear them from several holes away.

Every year, there they are on the sixth hole – Mickey Bradley and his crew. They’re cooking, they’re watching, they’re offering delectable southern fare to anyone who happens to stop by, whether it be a player, a caddie, a volunteer or someone who happened to get lost off Highway 15 in North Saucier, Miss.

They have become an institution during the two Pro-Am days prior to the Mississippi Gulf Resort Classic, running this year from April 1-3. And that is something Bradley takes pride in.

Just over 10 years ago, Bradley’s hometown of Biloxi was hit hard by Hurricane Katrina – “Twenty-six square blocks of Biloxi was missing by the next morning,” he said. So he got to thinking: What can I do to help? How can I help mitigate the damage, help restore my city to what it was before?

Of course, the first thought that came to mind was golf.

Bradley spent nearly 25 years working as a PGA TOUR rules official, retiring at the end of the 2013 season. When Katrina hit, he was well into his tenure, and he, as well as some notable players, figured there had to be some way they could help.

The lightbulb went off when Jerry Kelly approached him at the 84 Lumber Classic that year. A Pro-Am was the answer.

“Jerry Kelly came up to me, and he said, ‘What can we do for everybody on the coast?’” Bradley said. “Eighteen professionals volunteered their time – didn’t charge anything – and we had three Pro-Ams after Katrina. Enough to build nine homes for Habitat [for Humanity].

“Then, the TOUR came down and checked out where we could possibly have a Champions Tour event this time of year in the south. The community got behind it, and it’s turned out to be a wonderful thing.”

That year, the tradition was born, and it has continued ever since. And one of the cornerstones of that tradition – in addition to the funds raised for Habitat for Humanity, of course – has been the food.

The food is always there, even now, during the Pro-Am days prior to the MGR Classic at Fallen Oak Golf Club. There’s everything – pulled pork, ribs, fried seafood, raw oysters, and of course, jambalaya. For 10 years and counting, everyone who has stepped foot on the course during the week of this event knows there will be something special waiting at the sixth tee.

Once, someone asked Bradley which restaurant provides all the food. He laughed.

“It’s not a restaurant,” he said. “It’s just my family and friends.”

Ever since that first year, the money raised from the Pro-Ams has gone right to Habitat for Humanity, an organization that was instrumental in building up Biloxi in the aftermath of Katrina, which struck in late August 2005 and still stands as one of the top-five deadliest hurricanes in U.S. history. In particular, Katrina affected Mississippi’s beachfront towns, Biloxi chief among them.

“You have to build back because when you lose everything, you have to come back from scratch – which is very hard on everybody,” Bradley said.

Food isn’t the only treat to be found at the sixth hole at Fallen Oak. There is also spirit, spearheaded by Bradley, an honorary mayor of sorts in this city. The players who come to town for the MGR Classic are all Bradley’s friends. Some of them were on the Ben Hogan Tour, now known as the Web.com Tour, back when Bradley himself was the rules official in the early ‘90s. Then, he worked with those same players on the PGA TOUR.

“Now, I’m seeing them on the Champions Tour,” Bradley said. “So time really goes by fast, and here we are.”

These days, though, the players are perhaps a bit happier to see Bradley than they were back in the day.

“I’ve had rulings with all of them on the golf course,” Bradley said with a laugh, “so they all pretty much know when they see me coming, it’s not good.”

These days, the sixth tee box is a party. There are facetious chants of “Quiet, quiet!” when a player approaches the tee, soon to be followed by an inevitable, “Aim more right!” There is laughter. There is raucous cheering and applause the second titanium meets plastic, regardless of where the ball lands.

There is spirit. That is what characterizes not only Bradley, or the sixth hole at Fallen Oak, but Biloxi itself.

“It means a lot for our spirit, for the coast,” Bradley said. “Biloxi’s a special place.”