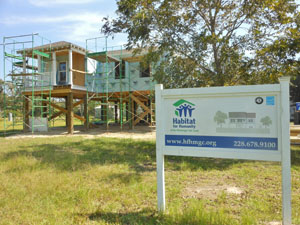 WHAT: Volunteer Build Day for Habitat for Humanity Home

PROJECT DETAILS: The project is construction of a new home for the Ladner family.  Ms. Ladner is a single mother of 3 children – 2 girls and 1 boy.  After losing their home in Hurricane Katrina, the family lived in a trailer provided by FEMA (Federal Emergency Management Agency) then a cottage purchased from MEMA (Mississippi Emergency Management Agency).  Their cottage was moved to the property where the family’s home was located prior to Katrina.

Construction began on July 23, 2012 when HFHMGC placed the cottage on 8 foot pilings to meet the flood elevation requirements and began to create a permanent foundation.  Three rooms are being added (living room, bedroom and bathroom) as well as an extended front and side porch.  The additions add 400 square feet bringing the total square footage of the 4 bedroom, 2 bath home to 1,344.  HFHMGC has successfully completed 3 of these cottage conversion projects in the last 3 years.

The home has passed all its inspections and is awaiting certification through the Insurance Institute for Business & Home Safety’s (IBHS) Fortified Program.  The Fortified Program is a third-party certification that assures a newly-constructed home meets above-code features such as reinforced roofs, enhanced wind pressure standards for doors and windows, and other extra structural benefits.  Each Fortified home must undergo plan review by a licensed engineer to certify that it will meet the site’s wind rating, plus 20 mph.  When this home receives its Fortified Gold designation (the highest level of achievement and the greatest disaster protection), the homeowner will be eligible for up to a 30% credit on wind premiums through their insurer.

The FORTIFIED programs is designed to help strengthen homes by using techniques and materials that will ward off damage from specific natural hazards and make the home stronger, safer and more durable. FORTIFIED homes are very likely to need fewer repairs after disaster strikes and are better for the environment in the long run because they are not likely to end up as debris in landfills following disasters.  Insurance discounts are available for FORTIFIED homes.

While this project is new construction, it is also serves as a major recycling effort since the MEMA cottages were brought in after Katrina for short term use.  With this conversion, a modular unit that would be worthless after several years will now be a long term housing solution for this family.

About Habitat for Humanity of the Mississippi Gulf Coast
Habitat for Humanity of the Mississippi Gulf Coast was formed in January 2007 when Harrison County HFH and HFH of Jackson County merged organizations. Since then, HFHMGC has incorporated Stone County into its service area and has constructed or repaired more than 550 homes. HFHMGC works in partnership with community stakeholders to create innovative, sustainable housing solutions by empowering all members of our community to actively participate in creating opportunity for people to transform their own lives. To learn more, visit www.hfhmgc.org.

About Lowe’s
Lowe’s supports the communities it serves through programs that focus on K-12 public education and community improvement projects. The company’s signature education grant program, Lowe’s Toolbox for Education®, has donated nearly $5 million in grants to K-12 public schools every year since its inception in 2006. Lowe’s Heroes employee volunteers support local community projects and our national nonprofit partners such as Habitat for Humanity and the American Red Cross. In 2011, Lowe’s and the Lowe’s Charitable and Educational Foundation together contributed more than $32 million to support communities in the United States, Canada and Mexico. To learn more, visitLowes.com/SocialResponsibility.

About Habitat for Humanity International
Habitat for Humanity International is an ecumenical Christian ministry that welcomes to its work all people dedicated to the cause of eliminating poverty housing. Since its founding in 1976, Habitat has built, rehabilitated, repaired or improved more than 400,000 houses worldwide, providing simple, decent and affordable shelter for more than two million people. For more information, or to donate or volunteer, visit Habitat.org.